Breaking The Cycle: The Habit Loop

Raise your hand if…

You have ever moved (or started a new job or joined a new gym) and in the process of driving there one morning, you end up getting off the interstate at the exit for your old house? Or maybe after a tough day at work you find yourself halfway through a glass of wine you aren’t even enjoying?

I’m sure that you aren’t raising your hand and I guess I’ll let it slide. But what I really wanted you to take away from this, is it probably led you to remember a time where you did something similar: you did an action simply out of habit. Without consciously doing it, you somehow ended up at your old house after work out of habit. You went on autopilot.

Habits are a funny thing and the more we research, the more we can see how the brain controls these things.

Often habits feel like they are out of our control, we have done something for so long that it feels impossible to change or sometimes it feels impossible to develop a new habit. But what if we broke it down? Enter the Habit Loop. This breaks down our habits into 3 distinct parts and shows us that rather than just trying to break the cycle or rid ourselves of a habit entirely, that we can change one piece of the puzzle to get a new desired outcome. Here’s what Charles Duhigg, author of “The Power of Habit” has to say:

“Over time, this loop – cue, routine, reward – becomes more and more automatic. The cue and reward become intertwined until a powerful sense of anticipation and craving emerges. Eventually, whether in a chilly MIT laboratory or your driveway, a habit is born.

Habits aren’t destiny… Habit can be ignored, changed, or replaced. But the reason the discovery of the habit loop is so important is that it reveals a basic truth: When a habit emerges, the brain stops fully participating in decision making. It stops working so hard, or diverts focus to other tasks. So unless you deliberately fight a habit – unless you find new routines – the pattern will unfold automatically.

However, simply understanding how habits work – learning the structure of the habit loop – makes them easier to control. Once you break a habit into its components, you can fiddle with the gears.”

So let’s dive a little deeper and talk about the structure: Cue, Routine, and Reward. The cue is the trigger that tells your brain to go into cruise control (automatic mode) and ushers a specific routine.  The cue can be a person, place, thing, or even emotion. Someone with a gambling problem might have emotional and locational cues..  The emotional cue is being worried about money. The locational cue might be driving by a casino.

The routine is the second part of this three-part loop.  The routine is an action that can be mental, emotional, or physical.  This is what really makes a habit, a habit.

The reward is what makes doing the routine worthwhile, at least, in your brain’s opinion.  A reward may not seem like a “reward” on its surface, especially if your habits cause you financial, physical, or emotional pain.  But your brain thinks of it as a reward; and rewards are what keep habits going. It’s that shot of endorphins you get every time you perform the routine.  The reward is what helps your brain figure out if this loop is worth remembering and repeating in the future. Runners who get “runner’s high” actually get a shot of endorphins after a run—that’s the reward.  Gamblers get the same chemical reaction in the brain when they gamble.  Even the act of checking your e-mail can give someone the same shot of endorphins, even though doing so does not feel like a form of reward. You can never really get rid of a habit, per se, brains are funny that way. Which explains why it is so hard to create new exercise or eating habits. Once you develop your routine of flopping on the couch after work and eating anything in arms reach, these neurological patterns stay inside your head and never really go away.  BUT, what you can do is build new neurological patterns that overpower the old patterns. If you can build a routine to exercise right after getting off of work instead of flopping on the couch, then the routine of exercising will start to win the battle.

I could sit here and tell you that identifying these pieces and changing the routine for 21 or 66 days will be a cure all. But that would be false and inaccurate and just rude on my part. It’s all about craving the reward. Identify the parts, change the routine, but make sure you still crave the reward. Once you start to crave the reward with a different routine in place, the new habit starts to win the battle. 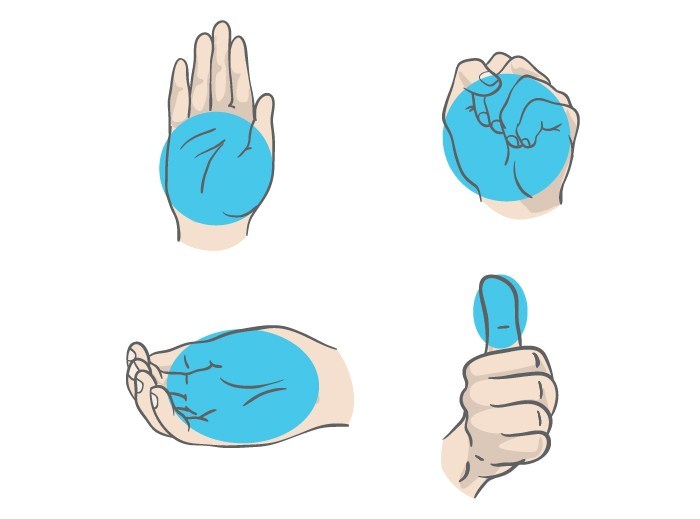 Throw Away the Food Scale: You’ve Had a Guide All Along

Throw Away the Food Scale: You’ve Had a Guide All Along